The road to becoming an accomplished musician requires thousands of hours of practice, repetition and conditioning of muscles specific to the instrument played. It is common for musicians to exhibit an inability to relax while playing, especially when learning a new phrase or trill. The repetitive nature of playing an intricate part in a tensed manner, whether gripping the instrument too tight, striking a series of keys too hard or attempting to play a part faster can lead to repetitive overuse injuries. 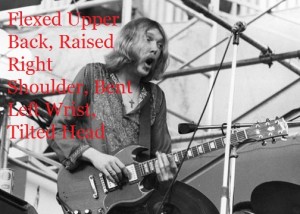 Whether you play brass, woodwinds, percussion, keyboards or strings, the majority of overuse injuries reported by musicians involve the hand and wrist. Excessive playing at high velocities for extended periods of time can cause inflammation in the tendons of the hand and wrist (tendonitis) and muscles of the forearm (myofascitis). With inflammation there is accompanying edema, redness, pain, trigger point formation (scar tissue) and potential loss of function. Common overuse injury diagnoses for musicians are carpal tunnel syndrome, arthralgia (joint pain), radial tunnel syndrome and cubital tunnel syndrome.

Neck And Upper Back

The second largest region of complaints following the hand and wrist is the neck and upper back. The neck and upper back are regions of the body that are stressed typically by musicians that hold their heads on an angle or move their heads forward and backward such as flautists, keyboard players and guitarists. Repetitive straining of the neck and upper back muscles such as the sternocleidomastoid, levator scapulae, rhomboids, scalenes and upper trapezius causes inflammation, pain, trigger point formation and loss of function. Joint dysfunction in the cervical and thoracic spine is a common finding as well due to muscular imbalance and improper positioning of the spine.

Hips And Low Back

Repetitive straining in the hips and low back is commonly reported by musicians that use their legs frequently such as drummers/percussionists and keyboard players. Muscles affected in these regions include, but not limited to, the lumbar erector spiane, quadratus lumborum, gluteus maximus/medius/minimus, iliotibial band, tensor fasciae latae, quadriceps and hamstrings. Joint dysfunction in the lower lumbar region (L5-S1), thoracolumbar region (T12-L1) and the pelvis are common findings as well.

In Part II of Repetitive Overuse Injuries in Musicians, we will discuss treatment options, rehabilitation and prevention of repetitive strain injuries.

Dr. Sessa is a chiropractic physician and owner at Clearwater Sports and Wellness. He is full body certified in Active Release Techniques; a patented, hands-on soft tissue movement-based technique. Dr. Sessa strives to help those in search of wellness find a path that best suits their needs.